Inspiring female founders, encouraging success stories, a strong network for female entrepreneurs - UnternehmerTUM wants to attract more women to the tech start-up scene and support them with special offers. Read here what moves our female community and which initiatives you can benefit from.

The proportion of women founding their own start-ups is still shamefully low in Germany compared to start-ups founded by men. If you look into this phenomenon, the reasons are always the same: too few role models, too many barriers to financing due to prejudice and, not least, a lack of confidence among women in their own abilities. This is where we come in, for example, with our Women Start-up initiative, which not only promotes a strong network that offers women exchange and support. Here, contacts are arranged and female founders are actively suggested for the offers and formats of UnternehmerTUM.

In various networking events and talk formats, we let female entrepreneurs have their say and report on their experiences, e.g. in our Female Founder Talk. You are welcome to watch the video recording here!

Read also in our key topic what moves our female community and which initiatives you can benefit from. 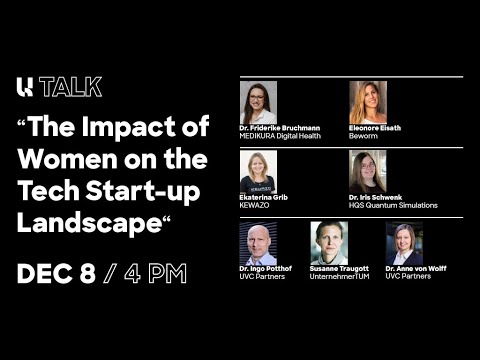 U Talk #16: The Impact of Women on the Tech Start-up Landscape

“My Own Company Allows Me to Implement my Creative Solution Strategies, Even if They are Crazy” – Interview with Entrepreneur Julia Davin

Julia Davin is an engineer specialized in AI and co-founder of the Munich-based AI company Masterplan Engineering. Together with her husband Alexandre, she offers customized software solutions and con...

"To Accomplish your Goals, You have to Create a Virtuous Ecosystem" – Interview with Entrepreneur Virginie Bezot

From July-December, 2020, Virginie Bezot took part in our Erasmus for Young Entrepreneurs exchange program as a so called New Entrepreneur and worked with Masterplan Engineering lead by Julia and Alex...

Entrepreneur Denise Schuster wants to teach young female founders how to build their own businesses with passion and dedication. In May 2020, she was honored by German Economics Minister Peter Altmaie...

With their start-up company inveox, founded in Munich in 2017, Maria and Dominik Sievert are revolutionizing the sample receipt in histopathology. Maria Sievert is considered a role model founder in t...

More women in the start-up scene: 5 questions to... Susanne Traugott from "Women.start.up!"

Susanne has been project leader of the Women.start.up! initiative since mid-2018. Previously, she worked for many years in the field of executive education and led the Executive MBA in Innovation and ...

Your bite of the innovation scene: stay up to date with news from the UnternehmerTUM network and our event recommendations and discover which start-ups are up and coming now.
You'll find our privacy policy with information on logging your registration, mailings via Mailchimp, statistical analysis, and unsubscribe options here.